In Oar of the Okavango

In Oar of the Okavango 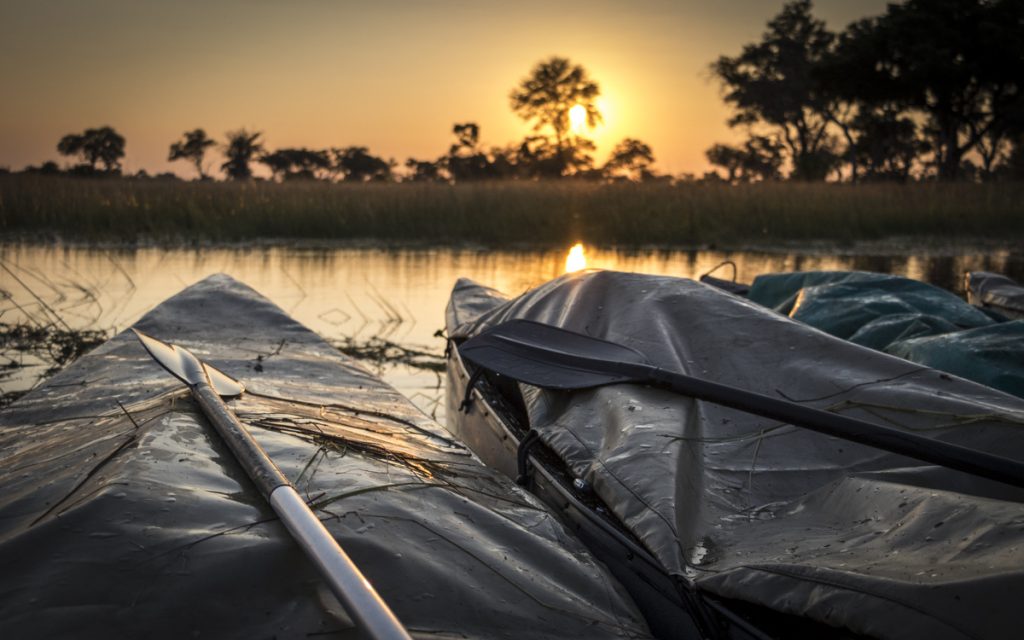 Drifting along the silent water, I use the oar to adjust my direction as we make our way along a narrow hippo path flanked by reed and sedge grass. Listening to the sounds of pied kingfishers chittering in a nearby tree, the call of a fish eagle from a distant island and the faint sound of my canoe gliding through the grass, I try to take in my surroundings, all the mean while paying attention to every ripple in the water that would be the giveaway sign of a hippo or croc lurking beneath.

Two weeks ago, I had a bush experience that was a first for me. A canoe trail that began on the Xudum river, where we set off upstream until we reached a large floodplain and paddled further east to connect onto the Kwappa river. We spent 4 nights paddling down the Kwappa (more like drifting) and camping on remote untouched islands on the western side of the Okavango Delta, and then walked back to the start. What an adventure!

The first day was an exciting one, as this was new to most of us in the group and we were not sure what to expect. It takes a few hours to get a hang of paddling with an awe and knowing exactly how many times you can paddle on one side before you end up in the reeds on the other. But we got to grips with it rather fast and soon became comfortable with maneuvering our canoes through the narrow channels. After crossing the shallow flood plain to meet up with the Kwappa river, we found the perfect island under a large Mangosteen tree just as the sun was beginning to set. This would be our camp for the night.

The next few days entailed waking up at sunrise and getting a kettle on the boil whilst listening to the last few roars of a distant lion calling before finding shade for the day. We would then head out on a bush walk and explore the island that we had chosen to sleep on the night before. Animals were plenty as we saw zebra, impala, kudu, wildebeest, giraffe and elephant on almost every walk. We found some of the largest specimens of different tree species some of us had ever seen, as well as beautiful Ebony forests along the water’s edge. Birds were also a highlight of the walks, as we could take our time in identifying and discussing each sighting. On one of our walks we were followed for hours by a greater honeyguide, a smallish rather ordinary looking bird that if one were to follow, will lead you back to a bee hive in the hopes that you may open it up.

We would head back for a late breakfast and then paddle downstream for a few hours until we found a suitable island for a lunch break. After lunch, we would find a shady spot under a tree and either read or have a nap until the heat of the day had passed. We would then climb back in our canoes and meander downstream for a few more hours, fishing rods out in the hopes of coming across a pool or lagoon that would prove to be a promising fishing hole. By the time the light was turning golden and the sun was heading for the horizon, we would begin searching for that nights’ camp site.

Our evenings were filled with the sounds of the night. The chorus of reed frogs interrupted by a Scopps owl, the snorting of a hippo from a nearby pool and the distant whooping call of a hyena just to remind us that we were not completely alone out there. The fire would crackle and the smell of smoke filled the air, we would look up and gaze at a sky full of stars, and talk of how lucky we are to be where we are!

Chase Africa Safaris
5.0
Based on 4 reviews
powered by Facebook