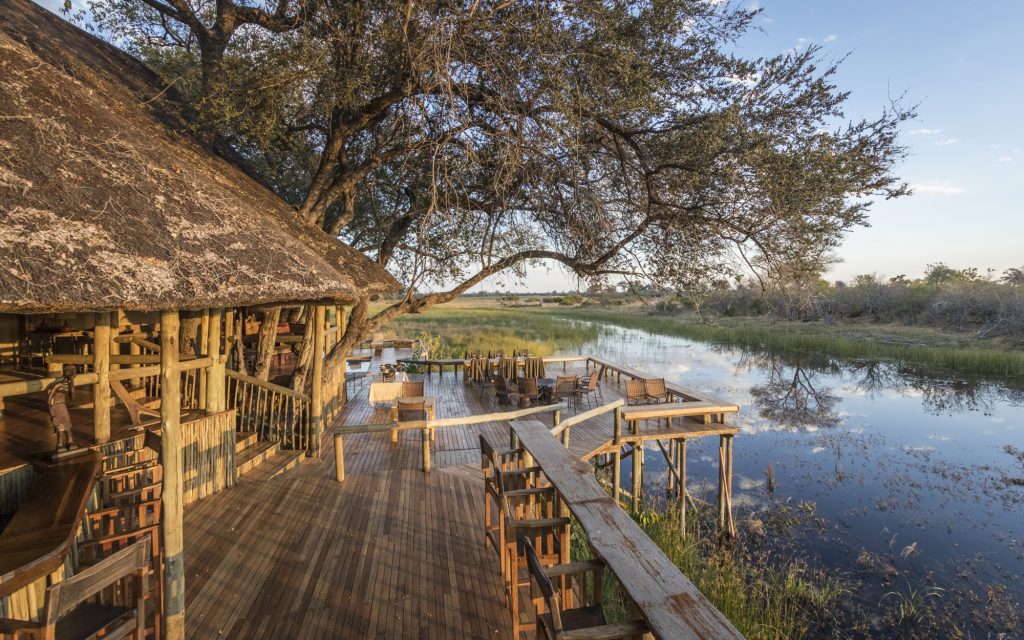 Last week I was lucky enough to spend 3 nights at Savuti Bush Camp in Botswana. I haven’t spent much time at the camp this year, and walking out front to the main area, I was happily surprised to see water in the channel. This time last year the channel was dry in front of the camp, and only the small pan which is pumped by the camp offered a quench thirsting water supply for the wildlife in the area.

With the channel being in flow past the camp, it gave the perfect opportunity to spend the afternoon watching a resident Pied kingfisher that would hover at the end of the deck, then dive into the water and come out on the odd occasion with a fish. A group of Pygmy geese kept me busy with my camera for hours in trying to get a shot of these beautiful birds that would fly up and down the channel past the camp.

The evenings were spent around the fire place under the stars and chatting about the days sightings and activities. The food was amazing and by the time dessert was finished I felt as though I would need to be rolled off to my room.

5 30am arrives way to quickly when one is fast asleep in such a comfy bed. But the nearby roar of a lion instantly got my attention and all of a sudden, I was wide awake and ready for the morning drive. (After a cup of coffee of course)

We headed down the channel in pursuit of the calls we had all heard. Our guide, Goodman soon picked up the fresh tracks of a large male lion making his way along the water’s edge.

And just as a fish eagle swooped down and plucked a bream fish out of the channel on our left, we turned the corner to find this beautiful specimen of a lion making his way down the road.

This cat was on a mission that morning, and we soon had to reposition the vehicle to make sure we didn’t lose sight of him. He was clearly in search of either his brother and some of the female lions of the area. After spending the morning following him and watching him cross a small stretch of water, we lost sight of him in some thickets. We would have to wait for the afternoon to try to relocate him.

That afternoon we found him close to where we had lost him, and now he had reunited with his brother. As the sun set and the light began to fade, the two of them waded through the Savuti channel in search of their pride of females and cubs. It was an incredible end to the day and a massive highlight for me, as it was the first time I had witnessed lions crossing water!

Moving into the hotter months of the year and as the channel begins to dry, the game viewing will only intensify in this area. Anyone that is able to withstand the heat, I suggest you get yourself to Savuti, as this is where the wildlife viewing will be as hot as the weather!

Chase Africa Safaris
5.0
Based on 6 reviews
powered by Facebook